All the insights you need in one dashboard

Consulting firms use our dashboard

Dig deeper into your data by manipulating it on Potloc’s interactive dashboard: run data crossings, generate charts, reply to your respondent's comments, and clearly identify the actions that will drive meaningful change for your organization. 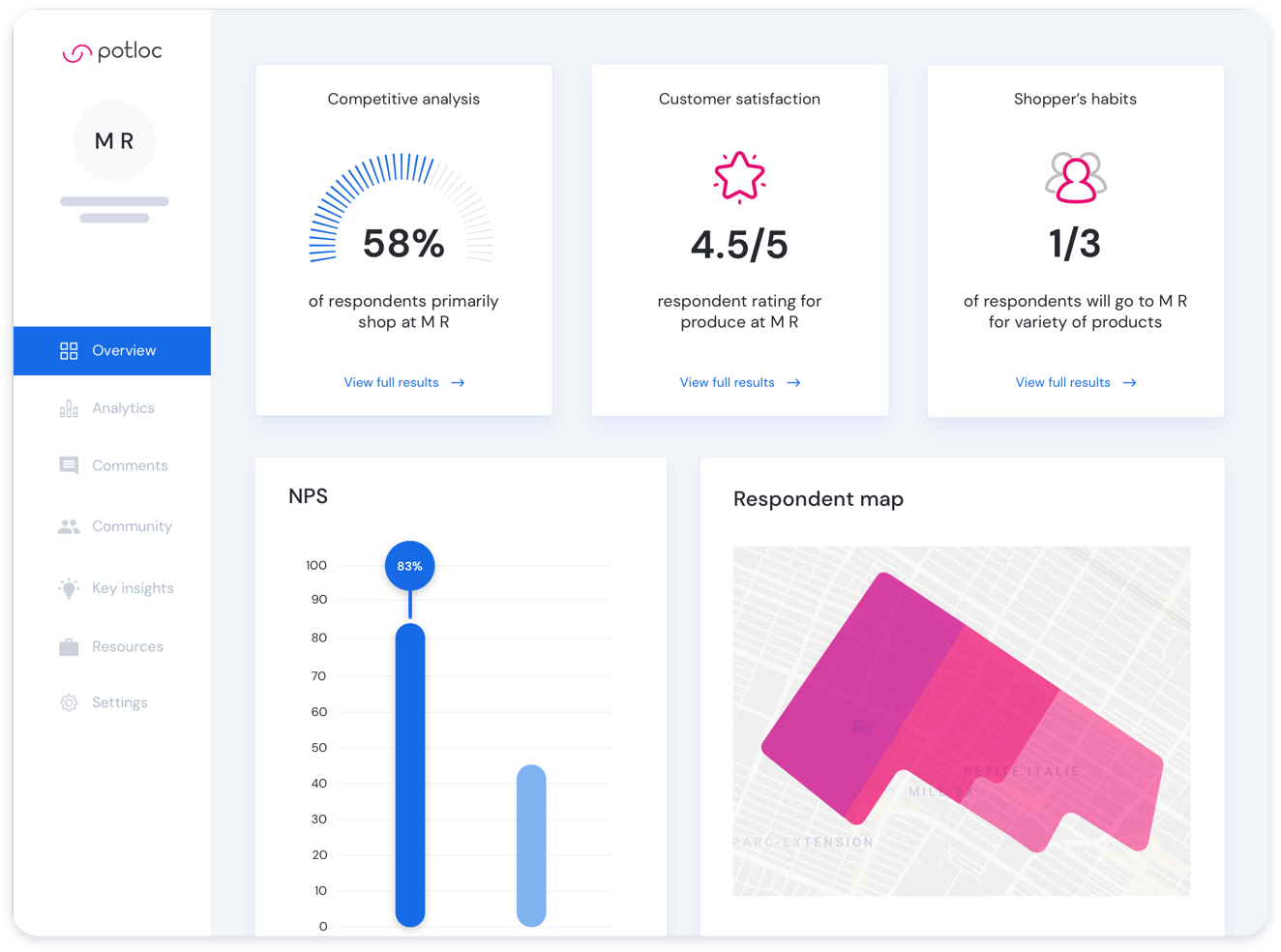 Visualize your data with our intuitive interface: Generate charts in your preferred format, see where your respondents are coming from on an interactive map. Go high level or as granular as you want.

Manipulate and filter your data: create cross-tabulations by social demographics, clientele typology, level of satisfaction, or any other metric you want to include in your study. Identify trends and leave your own annotations.

Spark a conversation: See respondent's comments, filter them by socio-demographic profiles and see where they are coming from on an interactive map. Identify key differences between trade areas or locations of interest.

Share results: export charts and graphs in .JPEG, .CSV, or .XLS, and use them in your presentations. Create a highlight page with only the results you want to share, or invite your team and external stakeholders by choosing the access level you want to grant.

A consumer research report that gets you answers.

Giving a voice to Canadian health workers who are attending the COVID-19 crisis.

The Remote Work Paradox in France

How are my results presented?

keyboard_arrow_down
The results of your study are available on our interactive dashboard. You can peruse your key insights at a glance, or dive deep into your respondent's socio-demographic profile.

Can I share my results with my organization? How?

keyboard_arrow_down
Each survey can be shared with individuals in your organization by using the “Share” function in the dashboard, where you can choose the level of access you want to grant. You can also create a shareable page with just the key highlights of your study for a quick, simple, high-level glance, without all the granularity.

What type of information is presented on the dashboard?

keyboard_arrow_down
On the dashboard, you’ll find the initial survey along with a detailed socio-demographic profile of your respondents that includes maps with their location. You’ll be able to see results for each of your questions with charts and graphs that you can dissect and display in various ways, as well as your Net Promoter Score (NPS). Respondent’s comments are organized in various categories, and a “Key results” section outlines insights that help you get the big picture before you drill down into more specific results.

Can I run multiple studies over time?

keyboard_arrow_down
Yes, as many as you want. Understanding consumers should be an ongoing task and not just for when you’re in trouble. You can gather customer feedback over time and see your net promoter score (NPS) progress with each of your initiatives.

How do you address biases related to the use of Social Networks?

keyboard_arrow_down
We acknowledge them! We know what biases we deal with and we know exactly how to address them. There are 4 types of survey bias when we launch a study:
All methodologies have a bias, few are transparent. We address survey bias head-on by sampling enough people to ensure we hit the targeted quotas.

For example, it is known that women answer more surveys and social media platforms have a higher representation of young people. However, it surprises most that there are sufficient elderly people on social media to collect needed responses.

Traditional survey methods like phone, intercept or web panels, apply weight to their results and are not transparent about the impact on the data collected.